Do I Need a Chin Implant? 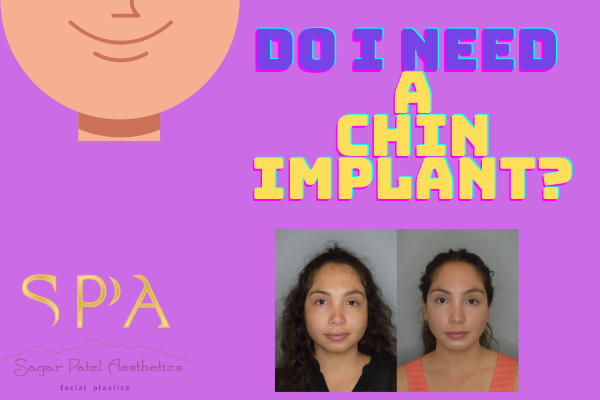 A chin implant is a surgical procedure in which the central jaw area is augmented using a prefabricated silicone insert. This can also be performed using other materials or by altering the bone itself (genioplasty). Chin implant cost can vary by surgeon location and expertise but averages $4,950. Overall, the procedure has a simple recovery and can be performed under local anesthesia with a downtime of about 5 days.

How to Know if I Need a Chin Implant?

A chin implant is one of the most common procedures that surgeons recommend despite a patient not specifically asking. Patients often complain that despite weight loss a double chin is still present. In these cases, a poor central chin projection leads to the under chin fat being compressed to a smaller area. Increasing the chin projection will always make the under chin area look more taught. The key aspect is knowing if one can get away with or actually needs this chin projection.

There are multiple techniques and lines that can be drawn to find the appropriate position of the chin. The first important concept is that chin projection will be different for men vs. women. An overly projected chin in women can look masculine. The most common technique involves drawing a line between the lips and extending it inferiorly. For a female, this line should be slightly in front of the chin, and for a male, the chin should be in line. There are many limitations of this including filled lips or a weak midface. In general, one cannot look at just the chin to determine where on the face it should sit. The entire jawbone and midface also need to be analyzed.

Do I Need A Chin Implant with Rhinoplasty?

The nose and chin job is likely the most common combination in which one will see a chin suggested. Oftentimes, when trying to bring the nose close to the face, we are limited in how much can be done. The chin being brought forward helps create this facade to improve one’s results. While this certainly adds balance to the face, the nose job cost is significantly more than the chin augmentation.

When one has heavy and full cheeks, the cheek fat reduction can help create contour in the upper face, however, the lower fullness along the jawline can still be bothersome. This can be masked with an extended chin implant that fills the transition of the lower cheeks to the “pre-jowls” and helps slim the face. This is a simple procedure that helps slim the face on its own but can really help the mid and lower face when combined with chin surgery.

The chin implant provides permanent results to improve the chin and will improve the appearance of the under chin area but cannot remove the fat. When the chin implant is combined with double chin surgery the results can be astounding. The chin implant also never addresses the lateral jawline so in effect a complete neck sculpting would include both surgeries.

Take the Next Step

Call us today at 424-394-0959 or fill our contact form to schedule an appointment. Not ready to book? Give us a call, we have the answers to all your questions!

Search
Recent Posts
Share this ArticleLike this article? Email it to a friend!
Email sent!