Sagging skin, loss of facial volume, dissolving bony architecture, and accumulation of fat all lead to an aged appearance of the face. The effect of these changes is different in every individual and likely defined by one’s lifetime sun exposure and genetics. Our most common presenting statement is: “I just want to look how I feel.” At SPA, we have developed a lasting, safe, and elegant solution. The solution: a facelift. 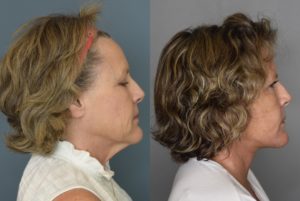 Dr. Patel takes longer than the average surgeon because he believes that sacrificing time and safety is never an option when it comes to your face. Utilizing meticulously planned incisions and careful closure, and masking the incisions are key aspects to the overall result. Employing a SMAS excision and tightening technique, Dr. Patel tightens not just your skin but the fine and durable layer below it in order to ensure a long-lasting result.

The greatest fear of all patients is that the results will look unnatural. Most surgeons acknowledge this fear but are not armed with the appropriate knowledge of what causes the “wind-tunnel” appearance.

What Can A Facelift Do For Me?

A facelift improves the look of the lower and middle areas of the face, and the neck. It is most effective for correcting the following:

Although a facelift removes or reduces signs of aging, over time, they will gradually reappear. A facelift does not improve the look of the brow, eyelids and nose, and some parts of the mid-face. A patient who wants to improve those areas might combine facelift with a brow lift or eyelid surgery, and/or with injectable soft-tissue fillers, facial implants and skin resurfacing. A facelift does not drastically alter the corners of the mouth, either. A facelift will tighten the skin, but will not change the texture. Finally, there are many wrinkles that are etched into the skin and a facelift cannot deface these.

Who Are Good Candidates For A Facelift?

The best candidates for a facelift want to correct one or more of the signs of aging indicated above; have some facial sagging, but still have elasticity in their skin; are generally healthy; do not smoke; and have realistic expectations about what rhytidectomy can do.

How Is A Facelift Performed?

A facelift is typically performed as an outpatient procedure in an office-based facility, surgery center or hospital. Patients may have a choice of IV sedation or general anesthesia. The procedure takes about 4 hours. The way a facelift is performed depends on the surgeon, the patient’s facial structure, and the extent of correction desired. The types are traditional facelift and limited-incision facelift. In both methods, incisions are closed with careful stitches. Scars are hidden in the hairline and natural contours of the face but no traditional facelift can be performed without a incision.

After facelift, the Dr. Patel wraps the incisions in bandages, and places drainage tubes. The tubes are taken out the next day, when the hair is carefully washed. If surgical clips are holding some incisions closed, they are removed, along with any stitches, one week after the procedure. Swelling, numbness, bruising and a feeling of tightness or tension in the face and neck may be felt. The face may look uneven or distorted, and facial muscles may feel stiff. Most of these side effects resolve within 3 to 6 weeks, and sensation typically returns to normal within a few months. Scars become less red, raised, lumpy and itchy over time.

How Long Do The Effects Of A Facelift Last?

Results of a facelift are not permanent, and some patients choose to undergo another in 5 or 10 years. In some sense, however, effects are permanent; years later, the face continues to look better than if rhytidectomy had not been performed. We always say we are not stopping time only turning it back!

What Are The Risks Of A Facelift?

Possible complications of a facelift include bleeding, infection, bruising, swelling or discoloration, allergic reaction to the anesthesia, skin blistering, nerve injury, and temporary or permanent loss of sensation in the face.

Office Hours: By Appointment Only